Manufacturers around the world have long used mercury in batteries to prevent the buildup of hydrogen gas, which can cause the battery to bulge and leak. 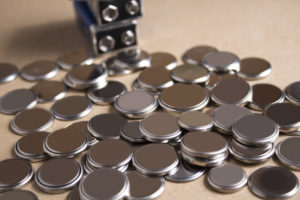 In mercuric oxide batteries, mercury is used as an electrode rather than an additive to control gas buildup. These are rather specialty batteries and are often used in hospitals, military facilities and commercial applications.. Those can use more than 25 mg of mercury. The mercury accounts for up to 40% of the battery weight and cannot be reduced without reducing the energy output of the battery. Mercuric oxide button cells once were widely used in hearing aids but now are prohibited in most countries. Larger mercuric oxide batteries still are produced for military and medical equipment where a stable current and long service life is essential.

Separate collection systems for batteries are in place in many countries around the world.

However, there are still problems in collection, which can be resolved mainly through political support for mercury-free batteries.

The Minamata Convention on Mercury, under Article 4 requires that Each Party shall not allow, by taking appropriate measures, the manufacture, import or export of mercury-added Batteries, except for button zinc silver oxide batteries with a mercury content < 2% and button zinc air batteries with a mercury content < 2% , after 2020, except where the Party has a registered exemption pursuant to Article 6.

The directive was adopted in 2006 and has been subject to a number of revisions. Last amendments were incorporated in November 2013, including a ban on cadmium from cordless power tools by the end of 2016 and on mercury from button cell batteries by 1 October 2015, although this review was initially intended only for cadmium in cordless power tools. The EEB contributed actively to this result (see relevant resources).

The prohibition of the manufacture, export and import of Batteries or accumulators that contain more than 0,0005 % of mercury by weight,  after 31.12.2020,  is covered by the Mercury Regulation (EU) 2017/852 which complements a large body of existing EU environmental law on mercury.